The First Golf Course in the City 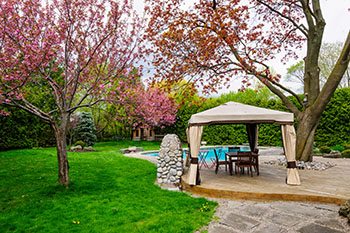 In the summer of 1896, golf was starting to get popular, especially in Seattle.

In 1897 Henry Hoyt introduced the game to a few Spokane people.  Mr and Mrs F Lewis Clark were interested because they knew it from their Maine roots.

The Clarks laid out a very small golf course on their 7th Avenue land and hit the ball back and forth.

The new location was 600 feet south of the existing Liberty Park Trolley Line which ended at 12th and Perry.

The clubhouse was built on the bluff at 1313 S Perry.   The bluff was ideal.   Nine holes were laid out.   Work on the new clubhouse started June 20th, 1898.  The clubhouse was designed by KK Cutter for free.  It had wide verandas for the views and to host dance parties.

The acreage was in a rectangular form, stretching from 12th to 15th Avenues (334 yards), and from Perry east to Magnolia (934 yards).

This area had a natural flat terrace running along 14th.  The ground rose uphill to 15th and sloped downward toward two benches, ending at 12th.  Going east, the course crossed several dirt roads and gullies.

Here is the course description:

The first tee is directly in front of the clubhouse.

After you drive the ball, you walk down the stairs to Perry and head east to hole one.  There is a wide ravine 50 yards across with a small creek running down Perry which  you have to cross.   There are also 2 ruts in the road you have to avoid.  Now you are in easy distance for the iron shot to the first green.   This hole should be played in 4 strokes.

The 2nd hole is the shortest on the course – 130 yards over rough land to a crude road near the hole.  The first shot is a problem because it is over rough ground.  Next there is a roadway with gutters. If played straight and correct, the ball will land on the green in 2 shots, and normally will finish with 3 shots.

The third hole is one of the prettiest on the course.  It is 217 yards long and, if played straight, no hazard will be met.  There is a little hazard off to the right all the way to the hole.  That gulley consists of a small ravine filled with undergrowth.    The hole is located just short of 15th and Pittsburg.  If played correctly, the ball should be sunk in 4 shots.

The 4th hole takes the player back over the ravine which presents a hazard when driving a long shot.  To avoid trouble, a long drive clearing the ravine is critical.   Beyond the ravine is the county road with a second ravine beyond it.    Unless the player can drive a full 50 yards, he will be punished by the loss of one stroke just trying to get out of the hazards.  The second stroke must also be well played, for just beyond the hole is another road (Madelia) and a deep ravine with steep banks to punish an overplayed ball.   The hole should be played in 4 strokes, but it generally takes 5 or 6.

The 5th hole is an easy hole with no hazards except crossing two tolerably flat roadways (Madelia and Pittsburg).  It should be played in 4 shots.

The 6th hole is a long hole, 425 yard with trouble all the way.  In playing this hole, one must pass three roads (13th at Magnolia, Pittsburg, Madelia) and two gullies.  The player must keep well in line in order to avoid neighborhood gardens and grain fields.    Fred Mason has made it in 5 strokes and he is the longest driver in the club. No one else can play it in less than 6, and often it takes 8 shots to complete this hole.

Holes 7, 8, and 9 take you back to the clubhouse.   There are no serious hazards except the overplayed ball can cost you a stroke or two.  These holes should be played in 4, 3, and 4 respectively.

A Booge Score of 36 is considered proper.  This is the standard used nationwide.  The Booge score represents a mythical player who makes every stroke just the proper distance and has no bad luck.    He is suppose to make the course in the normal amount of strokes.  On the Spokane course it is possible to make it in 30 strokes, but nobody has done it yet.

There are different levels of skill.  For example, Mr Hoyt has made the course in 40 strokes.

On October 11, 1900 the club invited Nelson, BC from Canada to play the course because they did not have land flat enough for a course.  Prominent men from Nelson are in love with the game.

Golf is a leisure time activity, complete with dress code and social norms.  A vivid description of the game as it is played in Spokane has been written in the Spokesman on October 22, 1900.

In 1908 the club planned to move again.  They were considering acreage near Ft Wright.   The 127 stockholders were looking to buy 170 acres at $800 per acre, some land being donated.

That plan was changed in 1908.  The club assessed the future and decided to go north to the Little Spokane River to build.

A complete story and map were printed in the newspaper on January 16, 1910,