A Strange Story of Deception 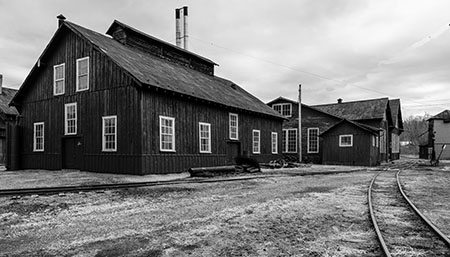 All through the early 1880's, the realtor that exclusively sold railroad lots downtown was LC Dillman.

A lot of his sales were east of Division from the Spokane River to Riverside Avenue.  He was the "go to person" if you wanted to buy a commercial lot downtown.

In 1890 things were changing.   And people at the Northern Pacific Railroad were also changing.  Gone were the men he had worked so well with over the years.

The Northern Pacific Railroad Company owned a tract of land on the south hill known as the Cliff Park Addition and they wanted to sell it.

They also owned a piece of very expensive land known as Shantytown down below between Bernard and Division from 3rd to 8th Avenue.  This area was in dispute with Henry Cowley, the early pioneer.

Lastly, they owned a tract of land adjoining their present freight depot and their new shops east of Division Street at Riverside Avenue which LC Dillman had been successfully selling for them for most of a decade....

Since LC Dillman had done a lot of land sales for the railroad, it was not unusual that he decided to buy these three parcels of land for himself spending $840,000  That was a huge sum of money, but it was very valuable land.

Dillman and the Railroad agreed on the sale.  They also agreed that the railroad would build shops and a roundhouse with a turntable on the third piece, to hold their shops.  It was further agreed if the railroad did not make the improvements, the price of the land would be reduced to $290,000.

During 1890-1893 Dillman paid the railroad $312,400.  The railroad accepted the money and the deal seemed to be going well.  But no deed was executed, nor any transfer given him for the land.  The railroad company kept promising that the buildings were planned and improvements were being intended, as agreed.

But Dillman now knows that at no time did the railroad plan to keep its promise.  Instead they acted wrongfully.   They compelled Dillman to pay a large sum of more money as time went on to keep Dillman involved.    But by that time Dillman was extended and not able to pay more.

That lack of a final Dillman payment allowed the railroad to claim Dillman had failed in his payments.  They took the earlier payments as theirs and had the land forfeited back to them.

The bad treatment started in July, 1890 and continued daily or more often.

During the time when Dillman could pay no more, the railroad sent daily, weekly, and then hourly telegrams to Dillman demanding money be paid.  They threatened to destroy his credit if he did not comply with their demands.  They even circulated a report that Dillman was insolvent and was guilty of fraudulent acts.

All of this embarrassed him in business and prevented him from securing more money from banks and others.

It stopped in July of 1891 and Dillman sensed something was wrong.  He suspected the railroad was finally just ignoring the deal had ever happened.

He demanded the railroad keep its part of the bargain and build the shops as promised.  He also demanded they complete the sale of the land they had promised to him.

His intent was to sell the land to others, but he was without legal title and therefore was stopped from doing that.

He assured the railroad that, if allowed to divide and sell lots, he could pay them off quickly.

The railroad said they were badly in need of money.  Dillman thought this plan would be successful.    Dillman received verbal assurances they would go ahead as he proposed.  Dillman knew all the wealthy Spokane people so he went ahead and raised money all year.  During 1891 he paid the railroad $224,400.  During 1892 he paid them an additional $88,000.  He believed his deal was finally on track and going to work out.

But the railroad did not keep its word.  They were secretly trying to force Dillman into bankruptcy.

During 1893 Dillman completely broke down.  He had domestic problems and personal setbacks.  They reduced him to being a physical wreck.  He was totally unable to do any business because of his mental deterioration.   Dillman tried calling Tacoma to speak with upper NPRR management.  He wanted to come over to Tacoma and complete some understanding of what both sides would agree upon.  If the railroad did not settle, Dillman threatened to go public with his experiences.

The railroad said Dillman was a common drunkard.  They claimed he suffered from delirium tremors as a result of his "dissipation".  Dillman said all the charges were untrue.   He did not drink, and his life had been led as an exemplary way as a example of decency.

To further embarrass Dillman, the railroad then sent out envoys openly charging him with fraud in connection with the land purchases.  Furthermore, they claimed he was guilty of embezzlement.  The railroad hired detectives to watch him.  Then they spread rumors that he was guilty of all forms of dissipation/drunken behavior.  The reports were freely distributed to many others.

Upon finally going to Tacoma, Dillman was immediately received poorly.  The railroad again charged him with the same offenses.  Afterward, he learned that a story had been arranged, charging him with embezzlement.   The railroad intended to call a Grand Jury to hear testimony.

Dillman was sick with despair.  He took to his bed in a state of acute mental distress.  The railroad, seeing his poor health, approached him with a document to sign.  It would release the railroad from all claims on the lands.  He signed, believing he was about to die and trying to right his affairs.   He wanted to save himself from disgrace of the false claims of fraudulant acts by the railroad.

He was in such a poor health that he did not recognize his rights were being lost.  He signed.   The release and the reassignment of a deed were fraudulent.  He claimed he had never given them these rights.

Somehow, Dillman started to get better.  Now the railroad switched its stories by explaining that they knew they owed the money, but bad accounting was the culprit.  They would correct it.    In the beginning, Dillman had agreed to make certain improvements, costing $65,000, which he did.  That sum had never been paid back.  The railroad was also supposed to set a final land value.   The original top value was $200,000 if no improvements were made.  Dillman learned that the railroad never intended to place any value on the land.

A cover story was created that said some of their management had erred and the railroad was protecting the bad actors.  The railroad claimed they wanted to avoid court.

Dillman used a smart tactic.  He tied up the land by getting an injunction against the railroad.  The lien would stop the railroad from disposing of any of their lands in question.

To settle, he wants $114,400 for the excess of the real land value he originally overpaid them.  He is seeking back his $65,000 originally paid by him to the railroad to build their shops.  If the railroad wants to complete the deal, he is looking for a refund of $314,400 and an additional sum of $100,000 for his general damages.

All this is unresolved and perhaps headed to court or settlement.   It is now lost in history....