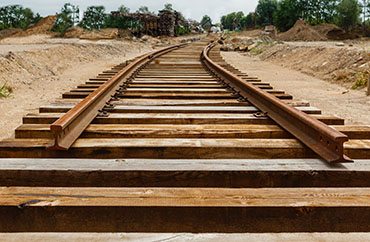 There were two men the Northern Pacific heavily relied upon to get track laid - Peter Larsen and Tom Greenough.   Peter Larsen lived in Helena and was 24 years old when he started railroad contracting.  Tom Greenough lived in Missoula and was 30 years old when he became a railroad contractor.  Both men ended up living in Spokane and investing heavily in the Village businesses.

How Was The Railroad Built?

It took a special kind of man to build the railroad.  A railroad contractor had to make 2 to 5 miles a day progress to get wealthy.  The railroad paid him at least $15,000 a completed mile for laying track.  Sometimes they were paid lots more.   He employed at a minimum 800 men, and sometimes up to 1,200 men.

In a railroad camp a typical day started with a flatcar arriving near the end of the line carrying 13 foot long 500-pound rails.  The car parked within 1/2 mile of the end of the track where men would reload the rails onto a horse-drawn cart and move the cart to the end of the roadbed.

Two husky men would grab the ends of a rail.  As they heaved the rail upward, a gang of other men in twos would join in and hoist the rail.  A typical lifting crew was 8 men, four per side.   The gang would move the rail to the exact spot and drop it in place, right side up.   An experienced "rust-eater crew" could lay four rails a minute - 2 rails wide by 2 rails long.    Another larger crew would drive 28 to 32 spikes into the rail, three blows per spike, two pairs of rails per minute, 400 rails to the mile.  The next day the same work would be performed. 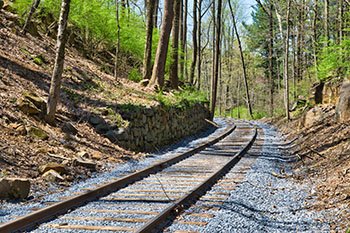 The hardest part of laying tack was recruiting labor.  After payday about 100 men would always leave to project.  Population throughout the northwest was very small.  Recruiting was difficult.   Men got $1.00 a day wages.  The turnover was large, and any able-bodied man was hired.

The crew progressed relentlessly, laying down track with the speed and precision of a drill team.  There were bosses to make sure the work progressed quickly.  Heading all this was a very experienced railroad contractor.

It wasn't hard to get a track laying contract.  Few men sought the contracts.  You needed front money.  The first cost was to feed the crew.  They there was the need to hire managers, worry about primitive living quarters, and ultimately paying the men on payday.   Laying track was hard work.  It needed to be performed quickly to make a profit.   A minimum to succeed was you had to lay 1-1/2 miles of track per day.  Below that, you would go broke.   More was expected.   The more mileage any railroad contractor completed, the quicker he would be given a new contract.

What did The Railroad Get?

The Government paid a railroad for every 20 miles of track placed.  That longer distance meant the money to finance the railroad was paid in chunks.  Money was slow to arrive for the railroad to pay the contractor.

The government, as part of the new law, gifted the railroad 10 square miles of land for every mile of track they laid.  This meant they were gifted 5 square miles on each side of the track.  The gift was in a 640 acre square mile section of land.

Every other section of land was awarded the railroad in a checkerboard pattern.  The government kept the alternating land sections.  The gifting of land ownership to the railroad was critical to their future success. In order to get enough land, the distance allowed from the tracks was a strip 20 miles wide located on each side of the railroad.

To get money, railroads often used this adjacent land near finished tracks as security to float bonds in Wall Street. That money was quickly turned around to pay for the future building of the railbed.  Everyone was stretched for payment.

If it went well, the future sale of adjacent lands and the promise of forever hauling of freight justified the risk of building a railroad.  The route was through uncharted land, Indian country, wilderness, and the railroad had no idea if they would succeed.

The railroads tried to sell land, but it was generally not too successful.  Until the federal government surveyed each section of new land - the land was virtually useless for reselling.  In a few areas - near cities - they could sell land for $2.00 per acre, which they did.  But in vastly unpopulated areas the land was simply there on barren prairie or in dense forest availabe for future use.  To build the Northern Pacific Railroad line, the final cost to the Government was $85 million.   As part of the deal the railroad successfully took title to 40 million free acres of land for their building activities.

Peter Larsen and Tom Greenough were the two men the Northern Pacific most relied upon to get track laid.   Both men became very successful at placing a lot of track.

They made the railroad wealthy.   In performing, both men also got extremely rich.  They found their temperment to be similar and they made many investments together.