The Most Elegant Apartments in Town 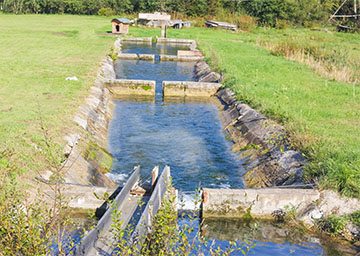 Simon Birch is Dutch and grew up in Amsterdam, New York.  He is now a large developer who is living in Spokane.

Amsterdam, New York was settled by a group of very industrious Dutch immigrants.  They logged and farmed and carved out a wonderful life.

The Birch family arrived in Amsterdam, New York 1835.  They went into the lumber and farming business.  In 1844 Seymour Birch, was born.  The son joined his father in logging.  The family prospered.

In 1862 at age 18 Seymour married Ann Munson.   The family lived comfortably and everyone worked well together.  When Seymour's father died, there was wealth.  Seymour acquired the family fortune and went into buying and selling land around his home town.

As the years flew by, Seymour reached 55 years old.   Ann's brother had settled in Spokane and was now actively buying and selling land.  One day brother-in-law George Munson sent word that he needed help.  He had been too successful in real estate and sought a partner.

Seymour and Ann moved to Spokane in 1899.   With them came the family wealth and his deep knowledge of how to buy and sell land.    Birch was skilled in selling properties and taking in farmland for trade.   Trading farmland for city property was not a comon thing in Spokane at that time.  Just two years later Munson died, leaving Birch with a very active one-person real estate firm.

The area reminded him of his home in New York.  Two years after he arrived, he built a house on Lake Coeur D'Alene across from Coeur d'Alene city.  It was on the most expensive beach on the lake on  Casco Bay.  His new house was nestled next to prominent jeweler George Dodson's new house.  On the other side was wealthy mine owner Colonel Peyton who was building an elegant new home.

In November, 1903 Seymour Birch made his first investment in Spokane.   He built a 3 story white brick hotel at the northeast corner of 2nd Avenue and Mill Street. The cost was $30,000.

The lot had been part of the old Havermale Homestead.  SG Havermale had sold it in 1887 for $700.   A week later it resold for $1,000.  A year later half of the lot resold for $2,000.   Next Rudy Gorkow bought the lot because it was adjacent to his brewery, spending $3,700.  He hoped to expand.  Two years later Gorkow went bankrupt.  The land went into receivership and it resold at a sheriff's sale.  Seymour Birch bought it from the sheriff for $2,500.

Four years later he sold the lot to Martha Miles of Cincinnati for $9,000.  He quadrupled his money.

He Builds Apartments In Spokane

In 1905 Birch built a new brick 9 unit apartment building 100' long by 30' wide.  It was located at 1124 W Riverside on the south side of Main Street, between Madison Street  and Jefferson Street.

It was across from the Lady of Lourdes Catholic Church.  The building had prominent entrances on both Main and down the hill on Front Street.   He spent $8,000 to build it, spending $900 for each apartment.

In 1908 Seymour took his first step in developing luxurious apartments.  He built the Espanola Apartments at 355 Oak Street on the northeast corner.  The design was old Spanish Mission.   In the center was a large courtyard so every apartment would have daylight on both sides.  Also he installed electric lights throughout the building, a novelty at that time. 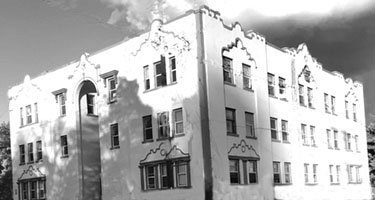 At the time the Espanola Apartments were considered one of the most elegant and spacious apartments in town.  They were located in the upscale Browne's Addition and were highly sought after.  They rented fast because they were large and modern.  All 26 suites had a kitchen, living room, bathroom, and two bedrooms.  These apartments varied between 3 to 5 rooms.   The rent was a decent $30 a month.

For the first time, Birch borrowed money to financed.    He took out a loan, but it was very conservative.  His loan was for $35,000 in the form of a mortgage with Traders Bank.  He pledged his two existing  properties worth $130,000.  They were the 2nd and Wall Hotel and his 2nd and Oak Espanola Apartments

Friends said he had overspent on the elgant Espanola Apartments.  They said he would never recover his costs.

But they were wrong.

His skill was in trading farmland for properties.   The next year he traded the Espanola Apartments for 1,100 acres of wheat land.   Oscar Green, president of the Ritzville Pioneer Bank, bought the Espanola Apartments.  The wheat land was worth $79,000 and Birch sold the apartments for $100,000.  His profit was $60,000.   Birch took a $21,000 note from Green for the balance.

Seymour Birch was a very genteel man and liked by all.  These were rare qualities.   For many years he managed the Hyde Building and the tenants were all very friendly.

In March, 1910 he bought 2 lots at the northwest corner of Pacific and Poplar Streets in Browne's Addition for $11,500.  He built apartments there.

By now he was working harder than he wanted.  To slow down a bit and spread the work he joined the Hege Real Estate Company   His first sale with them was selling a house at the southeast corner of Sixteenth and Stevens.  He sold it for $12,500.

With his existing wealth and his newer profits, he built the Birch Block, and then the Munson Building located on the south side of Main at Jefferson Street.  He built a 2 story brick building that was later  occupied by the Smith Funeral Home.

The most elegant building he erected was the 5 story clinker brick Tokyo Apartments, located a block south of the Sacred Heart Hospital.  They were on a lot on the southeast corner of 6th Avenue and McClellan Street.  The building was completed in September, 1910.    To set it off, he built a pagoda front giving it a Japanese entry look in appearance.

Over the years he bought and sold a lot of property in his own name.   One of the most memorable was the land he owned at the spot where High Drive would be built.    William Cowles and John Finch owned 100 acres up there and generously gifted the city the 100 acres of their land to build High Drive.

But key land was also owned by Birch.  He owned the 34 acres on top and a lot of land down the hill.  The Park Board wanted a scenic drive called South Drive.  To progress, the city condemned his land.  in 1911 both sides were in bitter litigation.  At issue was the price Birch wanted of $148,000

The city went ahead and condemned the land.  During the spring of 1914, the newly renamed High Drive was built.  Meanwhile the suit lingered on, heading to the state supreme court.

Jan Swagger subsequently sold the Tokyo Apts to Lizzie Gerhauser.  Within another year she resold the apartment to Tom Moore.  Each time it sold, the deal got more complicated.  It always involved notes and financing.

In 1916 the loan(s) went into default.    Nobody was paying the bank on the remaining $80,000 mortgage.  Birch paid off the mortgage and took the Tokyo Apartments back.

Seymour Birch was one of the most successful investors in Spokane properties.  He made an incredible amount of money during his lifetime.

He was a founding member of the new South Hill Presbyterian Church.   On August 10, 1921 Seymour Birch donated $50,000 to build the Manito Presbyterian Church at the corner of 33rd Avenue and Grand Boulevard.   Kirkland Cutter was hired as the architect.  It would be one of the last Cutter building designs made in Spokane. 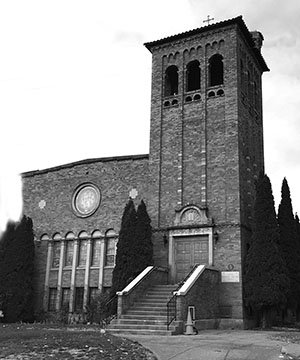 After living in Spokane for 24 years, Seymour Birch died from an appendicitis operation that went bad.   He died the next week on February 7, 1924.  He was 75 years old.