The Very Wealthy Richards Brothers arrived in the Village 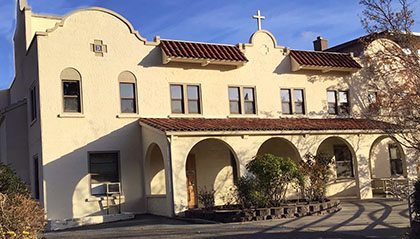 In 1888 John Richards (known locally as JPM Richards) and his brother Henry came to Spokane Falls.  The frontier was no new thing for them.  The Richard brothers had traveled over it from one end to the other, looking for customers to sell.

Their grandfather, John Moore, had become the biggest importer of firearms in the United States in the 1850’s.  JPM (John Phoenix Moore) and Henry had continued to successfully run the Moore Fireworks Company.  By 1888 the Richard brothers had bought out the 13 top competitors and were now mostly  all by themselves - selling fireworks all over the United States. 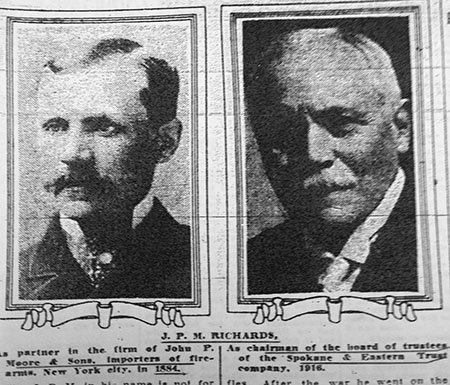 In 1888 JPM and Henry sold out.  It was time to look for the next chapter in their lives.  The brothers saw Spokane Falls as a town of just the right size.

JPM bought a house at 1725 W 1st Avenue, looking north with a wonderful view.  The house had been built in 1881.  It was one of the first very elegant houses built in Brown’s Addition.  Henry bought a house at 2136 W Riverside Avenue.  It also had a spectacular panorama, with views to the east, west and north.

The city was young enough for them to make another large successful investment.  Their timing could not have been better.  Shortly after they came, the Great Fire of August,1889 burnt out 30 downtown blocks.  The insurance companies paid only $3 million dollars on losses - not enough to rebuild the city.

The brothers soon formed a bank and called it the Spokane and Eastern.  The city was in need of money to borrow. The city now had 20,000 residents.  The bank  went into the lending business at a very good time.  Most of the investors in the bank were people the Richard brothers knew from the east coast.

Forty year old JPM Richards bought a frame building on Sprague Avenue to house the bank.  They occupied the second story.  It was a humble, older building.  At this time the bank mostly handled bonds, mortgages and securities.

Within 3 years they had succeeded, having survived the Panic of 1893.  Money was available to lend to others during this uncertain period.  Money was never a problem for the Richard Brothers, who were flush.

The S&E Bank moved.  It took up new quarters at the northwest corner of Riverside and Howard.

A young man named R Lewis Rutter arrived in Spokane in 1893.  Lewis's job was to collect delinquent loans for the Pennsylvania Solicitor Loan and Trust Company.   He was paid a salary of $50 a month.  JPM took a liking to Lou Rutter.  Richards asked him to join the S&E Bank as an officer at $150 a month.

In 1894 the bank moved.  It now was located on the northeast corner of Riverside and Post.

Business was so brisk that in 1895 they decided to move once again.  they leased the first floor of the old Cushing Building at the corner of Sprague and Howard Streets.  The rent was a very low at $75 a month, which included heat and water.  Within a year they purchased the entire building from the bankrupt Cushing estate.

In 1896 Henry Richards became an early investor in the Washington Water Power Company.  Soon afterwards he became the first president of the company.   It was through his efforts that introductions were made to eastern investors. WWP eventually floated bonds on Wall Street.  These bondholders within a couple of years completed a sellout of WWP to eastern stockholders.

The brothers were into all sorts of community activities.

In 1897 JPM was elected vice president of the Chamber of Commerce.   Henry was a leader in the Cowley’s Westminister Church at 2nd and Washington.  In 1898 Henry was appointed the chairman of the Fruit Fair, a very important local fall event.  JPM headed the Taxpayers League, which in 1902 protested higher taxes.

For the next decade the Richard Brothers were the center of Spokane society.  They were on numerous boards, lent money, donated freely to many causes, headed charities, formed prominent clubs, bought mining investments, and enjoyed all the drama they could imagine by living in a newly rapidly expanding city.

Two very wealthy brothers came to Spokane from the east.   They made a very large impression on the success of the city.

And in return, the city was changed forever in many ways by their activities.