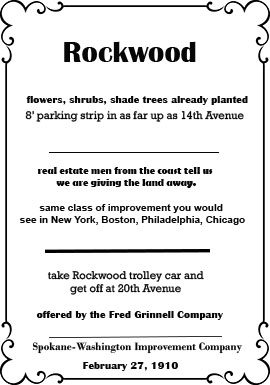 A band is playing. Orators are speaking.

And on this Memorial Day on May, 1915 - the new Riverside Park Cemetery is opening.

The crowd is awaiting the parade that is suppose to arrive at 3pm.

Entry is by car over to Ft Wright and then two miles on the Government Way, south to the big rock wall and the majestic entry gates. 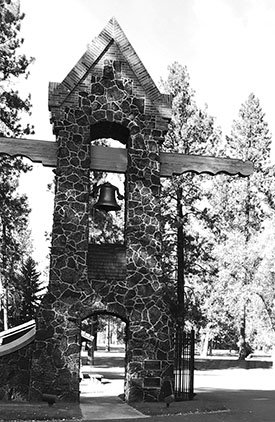 Seventy beautiful acres are covered with elegant stands of pines and offer a tranquil final resting place setting.  Adjoining are an additional 102 acres on three sides, owned by the state.  Riverside State Park is rustic and natural and makes the manicured cemetery look distinguished.

Although the first improvements were made a year earlier, this is the first time the public has seen the huge rock entry gates and the majestic rustic stone arch and bell.  John Sherwood is the President and realtor Arthur Jones is the Vice President.   Both are very well known in the community. 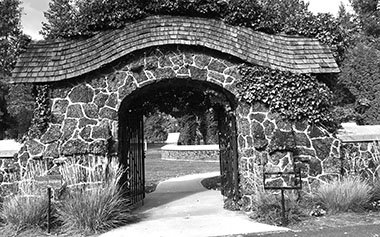 On January 7, 1882 JJ Brown, Andy Cannon, and Frank Moore realized there was no proper burial place in the Village.   They asked for ideas from others.

The first cemetery was at the end of Pacific Avenue on a flat bluff.  It was in Browne’s Addition.  It is believed 5 bodies were buried there as early as 1876.    From here on, it became the place to be buried.

By 1885 there was a movement to get the bodies moved further up the hill.

This was the city's 2nd cemetery.  The cemetery was located on the homesteader pioneer Andy Cannon's original land.

Judge John Bogge bought land and platted the middle of the south hill area.  He donated 4 blocks for the 10th Street Cemetery in 1884.  It stretched from Walnut to Maple and from 9th to 11th Avenues.

The cemetery was used actively for only about 3 years, until the end of 1888.

In 1892 Judge Bogge took the land at the 10th Avenue Addition back and the cemetery was closed.

The population of the city was exploding.  Cemeteries inside the boundaries were not on desirable land. Burials needed to be removed from town.

In 1888 the city council passed a detailed Cemetery Law.   It decreed that no cemetery could be built inside the city limits.....

By the time the land was surveyed, mapped, and formally opened, Greenwood lots were in demand.   For $50 a gravesite, many prominent people were selecting this attractive cemetery for their burial.  In 1896 the activity became brisk.  The grave price was raised to $100 a site.  There were newspaper ads by Rogers and Rogers, the leading realtors who were doing the selling.

In April, 1885 Andy Cannon died.  He solely owned Greenwood Cemetery but it was not profitable yet.  To settle his bankruptcy estate, his widow Jennie sold two prominent local lawyers the cemetery for $6,000.   William Ridpath and Judge George Turner bought the cemetery from the estate sale.

Greenwood land lacked a legal deed.  To clear title Graves and Ridpath had to go to court.  In May, 1888 the district court decreed the sale could proceed.   The sale was finalized, but no money passed.   Instead Jennie received a note giving monthly payments intending to support her over years.

At the same time another group wanted something different.  DT Hamm platted a cemetery up north called Fairmount Cemetery.     In 1889 the first burial occurred in Fairmount.   Frank Smith, a very popular Italian merchant was buried.

In 1888 EJ Webster joined DT Ham to form Fairmount Cemetery Association.   This cemetery was favored by a different group of city residents.  many were simply opposed to Andy Cannon and Greenwood Cemetery.

The west end of Brown’s Addition had rapidly become filled with elegant and fashionable homes.   Wealthy residents like John Finch, Assa Campbell, and William Witherspoon drew up a petition in 1886 asking the city council to remove the old Brown cemetery.

They wanted the city to dig up and reintern the 17 bodies located in this very old cemetery at the end of Pacific Avenue.  It overlooked the west end of Browne’s Addition at the cliff.

They asked that the bodies be moved to Fairmount or Greenwood Cemeteries.

In 1887 Fairmount Cemetery was at least 4 miles north of the city.

Plans to join Fairmount with the well-traveled Monroe Street were announced by businessman John Sherwood.  He wanted to build a 100 foot wide Boulevard.   His idea was to use the center 40 feet and retain 30 foot wide strips on each side.  It was to be an elegant wide road.

Northwest Boulevard was planned.  The direction was diagonal from Monroe Street, straight northwest to Fairmount Cemetery.   Building this wide road wasn’t all charity.  Sherwood and Boston investors like Brock Adams owned a lot of adjacent land.  The wide boulevard would allow them to sell lots along the route.    To sweeten the deal, they proposed to pay all the costs for building the roadway.

The city took them up on the offer.   That is how we got Northwest Boulevard.

As the  Riverside Park Cemetery opened in 1915, one of the most distinguishing markers was the Finch Mausoleum.  John Finch had just died in June and was one of the wealthiest mining magnates in town.  His new burial building was designed by Kirkland Cutter, a very famous local architect.  It was built of light grey, polished granite slabs.  They had been imported from Parre, Vermont.  The building resembled the Temple of Victory in Athens, Greece.

The building dimensions were 24’ long and 18’ wide.  The height is an incredible 24’ high.   Located on a circular drive nearer the south end of the grounds, it was an imposing landmark. 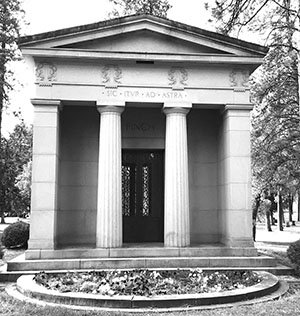 Not just anyone could build it.  PN Peterson of St Paul came here just to erect this very elegant and special building.

On the east and west are identical entrances set off in majestic Doric columns.  Each entrance is fitted with two pairs of bronze gates to ensure absolutely privacy.  Over each entrance is an inscription saying “sic Itur Ad Astra” meaning “The ascent to the stars”.  A wreath of pine cones and pine boughs is carved above the inscriptions on each end.  There is also a frieze to remind a person of reference to the stars.

Flowing east from that entrance are steps leading to a semi-circular pool.  It reflects the building’s image in its reflection.  Vases in the corners of the pool hold pond water lilies.

Inside the building all the walls are finished and shiny.  Windows exist on the north and south sides above the sarcophagus.  Each wall was milled out of a solid sheet.  The roof is comprised of three giant granite slabs – 8’ x 32’.  Each slab weighs 26 tons!

Winding roads take visitors all over the cemetery and there are pathways near the roads for the walkers.  So far 200 internments have been done in the 9 months since it opened.  Additional mausoleums are planned by other very wealthy families.  Once the grounds are filled, there will be 40,000 graves in the cemetery.