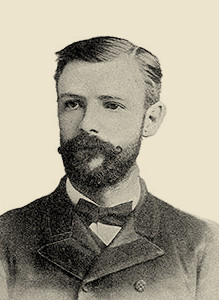 I am Art Shaw, city editor and publisher of the Spokane Falls Gazette.

In 1880 I was a young man farming the family acreage in New York state. The world was exploding with ideas. Electricity was a wonderful new invention. The telegraph linked people coast to coast. Stage coaches were being replaced by the railroads. Soon carriages and horses would succumb to new fangled automobiles.

Northern Pacific Railroad had completed being built. By 1881 it was running coast to coast.

I was restless. All young men were itching to go west to find fame and fortune. So in 1886 on a warm summer day, I bade farewell to home and bought a one way ticket out west.

I was filled with expectations. The stark, faceless prairies of Kansas and the Dakotas passed by. Suddenly Pikes Peak arose above the prairie. I had finally reached the Rocky Mountains. The air felt fresh and new. A swelling of excitement flooded me. I was going west to meet my destiny.

The train pulled into a dusty frontier city called Spokane Falls. There was a bustle in the dirt streets. A lot was happening. I got off the train. It was a bright July morning and there were new experiences all around me.

I needed a quick job to sustain me. I headed to the local newspaper to apply for a job as reporter. Nobody was there. And for the next 5 hours the office remained empty. I had to wait until early afternoon to talk to the owner. He was extremely laid back. I was in luck. In order to compete with the two other newspapers in town - he needed a city reporter. I was hired.

For the next three years I pounded a city beat. I walked the streets. There was much news, just plain gossip, and divorce issues. People argued politics. This frontier city was growing fast. Many prominent weddings were held. Funerals were large events. Churches formed and then expanded with new buildings. I knew everyone and I wrote about many subjects. I was getting very well known in the city.

In 1889 the 30 downtown blocks burned down. All the wood frame buildings were destroyed. The city rebuilt and arose from the ashes. In hours the most prominent men announced they would rebuild, this time using brick and stone. That is the reason for the modern downtown we now have.

In 1894 I ran against Pappy”Drumheller for Mayor. He was a real western cowboy and an early pioneer. Pappy Drumheller was so revered that people trusted him with their money. He formed Traders Bank. I Iost the Mayor race to him by 7 votes.

By 1897 I and a partner opened as printing business called Shaw and Borden Printers. It was a huge success.

We had a crooked city council in 1889. They were known as the “ham council”. Many cities sent hams and relief supplies to the city to aid the fire victims. All these items mysteriously flowed into the hands of the “ham council. They never reached the needy. The citizens were irate. The citizens wrote a new City Charter throwing the ham council out of office. I ran for one of the 14 new commissioner spots. I won.

This newspaper is now a leading newspaper in the city. Over the many years it has faithfully reported the events as they happen. The Spokane Falls Gazette is an accounting of life in a new western town. It is a gathering of the events that every western city in the United States experienced.